We’ve been working with Versus Arthritis since 2020 to design and deliver a range of supporter-focused email journeys that successfully integrate campaigning, fundraising and services to build meaningful supporter relationships and long-term support. 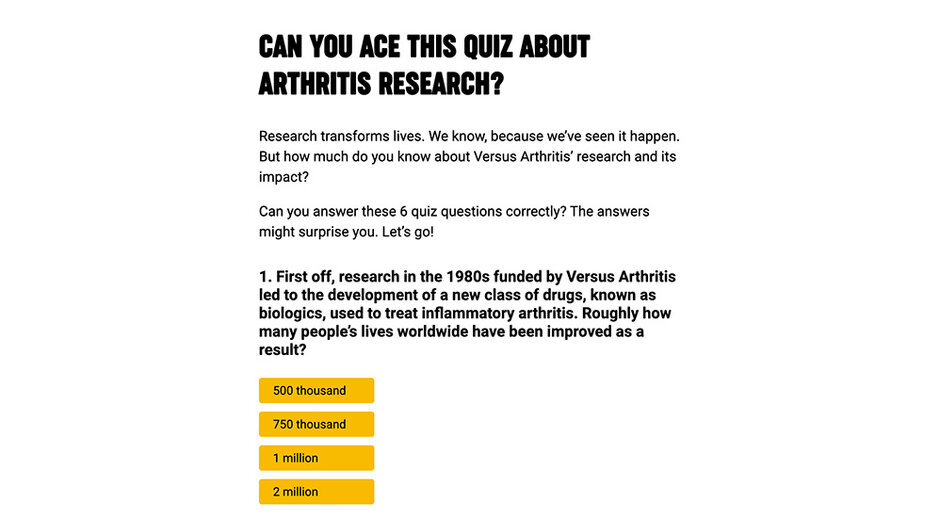 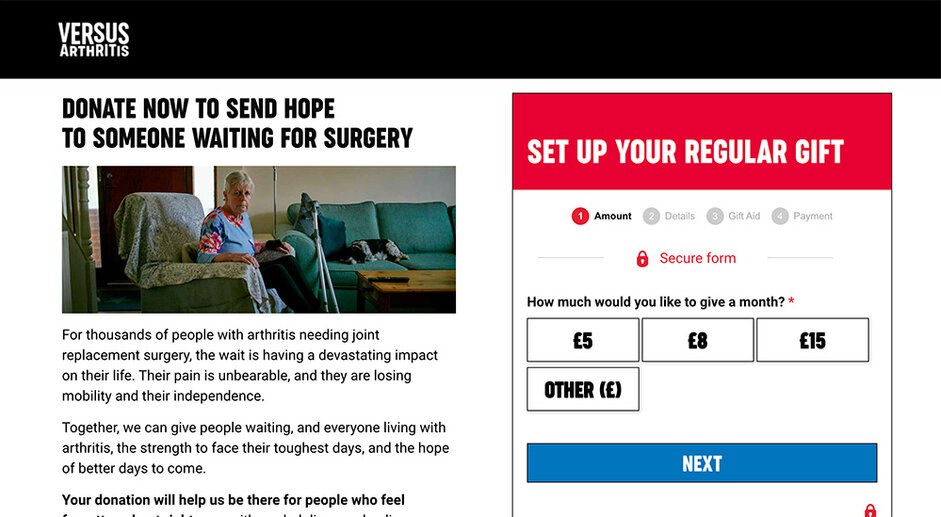 We approached more onion because we’d had a lot of success in growing our database but were really struggling with ongoing activation and retention of new contacts. As a newly merged charity with a new brand, we were also struggling to recruit new donors in a cost effective way. Working with more onion was a fantastic experience and helped us to develop a very effective engagement programme which has delivered on a range of organisational objectives, while recruiting new donors at a significantly lower cost than other activities. They worked closely with teams across the charity to really understand the needs and motivations of our supporters. I would highly recommend them to any organisation looking to create a supporter centric engagement programme that can deliver meaningful change.

As part of their new fundraising strategy, Versus Arthritis were looking to increase their donor numbers and income by recruiting new supporters through simple digital actions and then building a relationship with them through engaging email welcome journeys.

Our project began in 2020, when we were tasked with designing and building a welcome journey for 20,000 supporters recruited through a pledge as part of a wider brand marketing campaign. The journey needed to introduce these new supporters to Versus Arthritis and their work, and persuade them to support the charity financially.

Our hypothesis was that an audience-focused journey that incorporated a range of content and actions - including campaign actions and service offers - would boost engagement and convert these new supporters into donors.

Working with a range of teams across the organisation, we developed a comprehensive journey strategy that included objectives, metrics, an audience hypothesis and cohesive narrative and key messaging. We then designed and implemented a six month welcome journey. This included generating ideas for engagement actions, sourcing, writing and developing the content for all the emails and actions, and building, testing and sending them.

We worked in an agile way to roll out the journey, being reactive and flexible as the context changed frequently (due to the ongoing pandemic), and continually reviewing and optimising the journey based on the results we were seeing. We also focused on segmenting and personalising email content in response to supporters’ behaviour to maximise our impact.

Our in-depth analysis of the journey showed it successfully met its objective of engaging new supporters and converting them to donors, with 35% taking at least one trackable action and 2.7% supporting the charity financially, equating to hundreds of new donors.

Our analysis also showed that supporters who took an action were 4.6 times more likely to have also made a donation, proving our hypothesis of there being a correlation between engagement and donor conversion.

The final journey evaluation, which was presented to stakeholders, also gathered together a huge number of insights from the journey. This included the learnings from a range of different tests, such as the sender for donation asks, the framing of donation asks, segmentation of emails based on the supporters’ relationship to arthritis and subject lines.

Building on the success of the welcome journey, we’ve continued to work with Versus Arthritis on their journeys, gradually rolling out the best practice developed for this initial project to other email journeys across the organisation.

This next stage of the project began by designing and building an ongoing journey for supporters who had received the welcome journey, as it was clear that a continued integrated journey focused on engagement was the way to maximise donor conversion (and return on investment), rather than sending them Versus Arthritis’ standard monthly email newsletter.

After seeing how positively supporters responded to both campaigning and donation asks in the welcome journey, we then collaborated with the campaigns team to roll this ongoing journey out to an existing audience of campaigners. Messaging and actions were tweaked when required, and emails segmented, to make sure we stayed audience-focused and met their needs.

Up until this journey these campaigners had never been asked to financially support Versus Arthritis before. After six months of receiving the integrated journey, 35% had taken a trackable action and over 4% had become a financial supporter. The campaign that was featured in the journey also achieved a big win, thanks to thousands of supporters emailing their elected representative.

Rolling out abest-practice approach for all journeys

With five different journeys delivered and 18 months of data gathered, we’re now in a place where we can start looking at longer-term trends and establishing whether we’re building the longer-term relationships with supporters we’re aiming for.

One of our key metrics for assessing this is the percentage of first-time donors who have made a second donation (or financial action, such as playing the lottery) in the journey time-frame. Our analysis shows this is between 15-22% - in some journeys nearly a quarter of donors are making a second gift. Analysis of fundraising data also showed that supporters in a journey not only raised more money, with a 32% higher average gift, they were also more likely to bank that money, with a 31% higher banking rate.

With clear evidence that an integrated approach to their journey strategies is building meaningful relationships and meeting their objectives for both campaigning and fundraising, Versus Arthritis are now looking to roll-out this approach to all of their supporter journeys.

The success of these projects has led to the new role of a Supporter Journeys Manager being created, and we’re working with them and the campaigning and fundraising teams to build and strengthen their in-house knowledge and skills so they can lead on designing and delivering these journeys themselves, using the best practice we’ve developed, across the organisation.